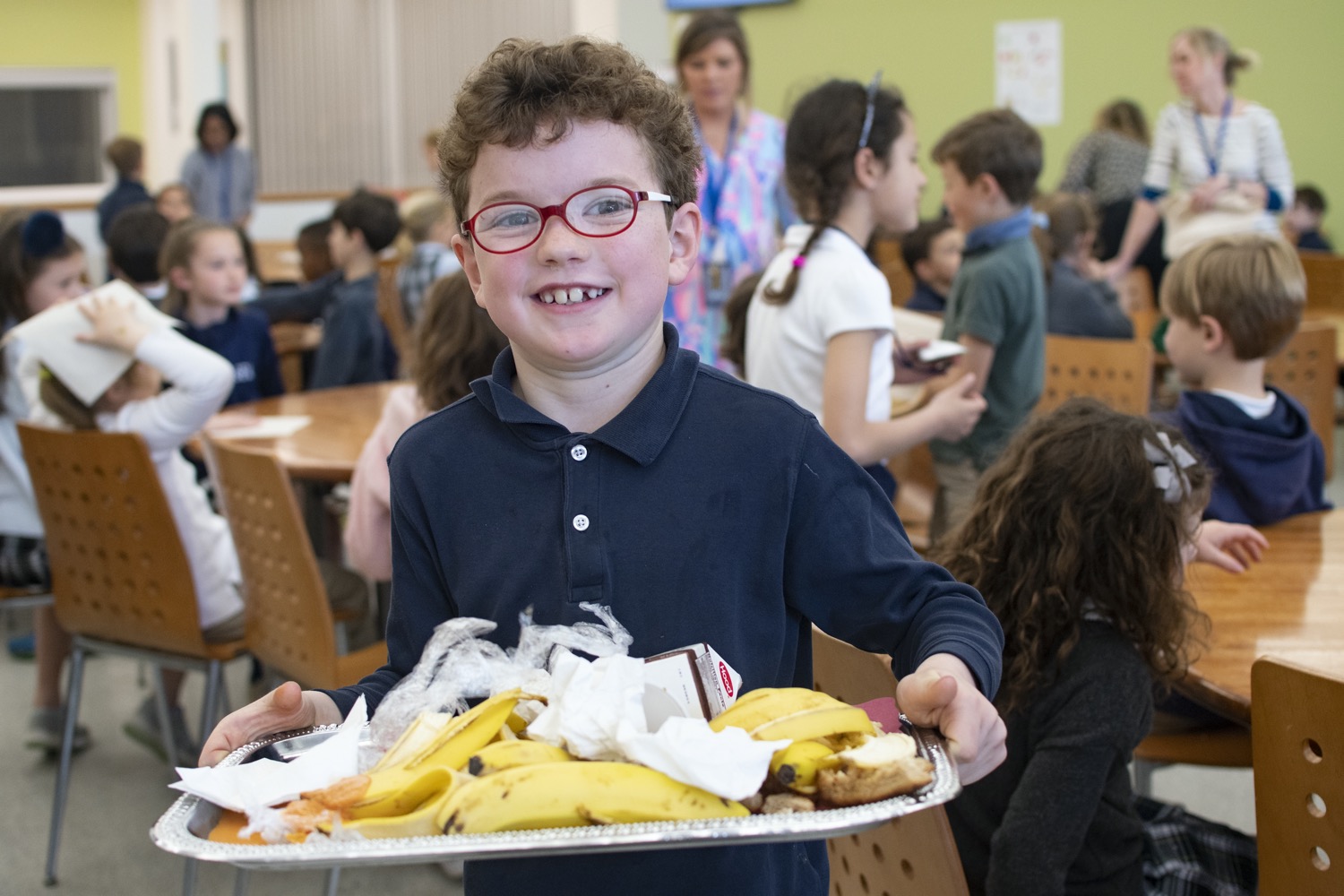 For many of us, each time we prepare a meal, all the scraps – vegetable peels, fat trimmings, bones, maybe even the leftovers – end up in the garbage. Deprived of oxygen and scavengers, these food scraps can take years to decompose. Buried in a landfill and sealed inside a plastic garbage bag, something as simple as a head of lettuce can take up to 25 years to decay. Moreover, food waste has a significant impact on our land, water, and air. In 2012, the Natural Resources Defense Council (NRDC) issued a report on food waste thatshowed the journey from farm to fork “eats up 10% of the total U.S. energy budget, uses 50% of U.S. land, and swallows 80% of all freshwater consumed in the United States.” Despite this incredible investment of resources, an amazing 40% of that food goes uneaten, and much of that rots in landfills, accounting for 16% of our nation’s methane emissions. A 2015 report from the Connecticut Department of Energy and Environmental Protection estimates that, in Connecticut alone, close to 520,000 tons of food waste is thrown out annually, comprising a little over 22% of our state’s total waste collection.

“People believe they are not wasting as much food as they actually are,” said Margaret Brown, Senior Attorney for NRDC, who specializes in law and policy on school food. “With market factors like date labelling, people read the expiration date and think the food is bad. It may not be, but they throw it out anyway.” Discarding food translates to throwing out billions of dollars every year – $165 billion, according to the NRDC. And this food is thrown out in spite of the fact that there are 40 million people in the U.S. who are food insecure. This is a shockingly large gap between wasted food and hungry people who need it.

Thankfully, many school districts in Connecticut are taking food waste seriously. Israel Putnam School, in Meriden, and Rock Hill Elementary School, in Wallingford, have both implemented "food share tables." Students leave uneaten fruit and packaged snacks on a table in the cafeteria for other hungry students. Unclaimed leftovers go to local food pantries, with thousands of pounds of food having been donated so far.

Other schools take it a step further by composting. Some do so on site, while others use a composting company to cart it away. In Mansfield, the elementary and middle schools have recycled 40% or more of their waste since at least 2000, including composting lunchtime food waste. The middle school even created a composting “how-to” manual to help other schools follow their successful model. 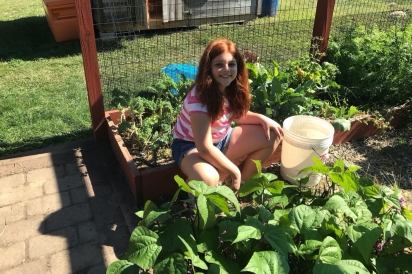 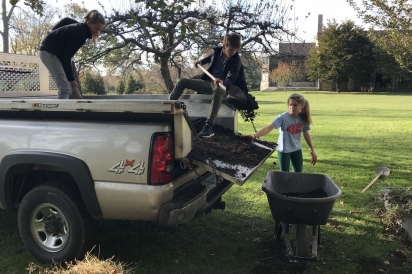 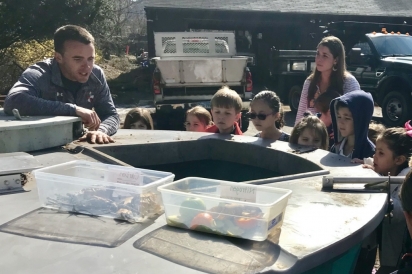 For Canton Intermediate School, Blue Earth Compost is their food scrap hero. The Hartford-based company has been collecting food waste for off-site processing into compost since 2013. “Schools were an early supporter of our business. Each school sought us out,” says owner Alex Williams. “I’m in a conversation with other schools right now. It’s a source of growth for us, plus a teaching opportunity.” Diana Hiza, a Canton Intermediate teacher and sustainability coordinator, explains how the school’s 36-student “Green Team” helps organize the food scraps for collection. These volunteers streamline the composting process by monitoring lunchtime recycling, making sure plastic doesn’t mix with food waste. So far, with their help, eight tons of food have been kept from the landfill. “I don’t think people think about where [food] goes,” says Hiza. “They think it’s burned into energy. But those facilities are overwhelmed. When you throw it away, where’s away?”

In Wilton, the entire public school district kicked off a Zero Waste Initiative that sorts recyclables and donates excess food from school lunches to local food pantries. Middlebrook Elementary School was the initiative’s test subject in 2017, with the district’s other schools following their lead within a year or two. Proudly proclaiming the slogan “Warriors Won’t Waste,” Middlebrook works with another composting company, Curbside Compost in Ridgefield, to collect their food waste. “The more material we’re composting, the greater the impact we’re going to make,” says Curbside’s owner, Nick Skeadas. “It’s all an upside.” 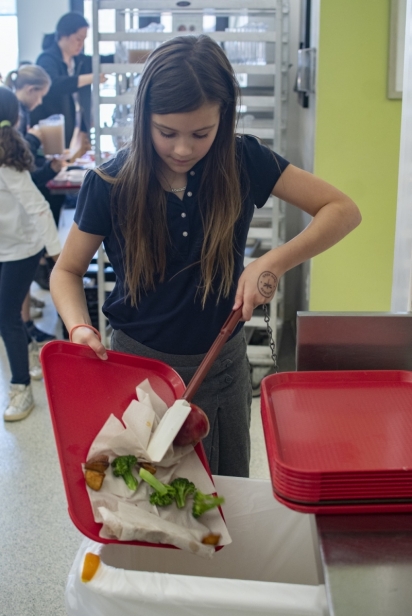 Heather Priest, Middlebrook’s Culinary Arts and Sustainable Living instructor, recalls a food audit that showed they were discarding about 2,000 pounds of food every week. That’s when they knew they needed to make a change. “Once you start down that rabbit hole, you realize how much food waste there is,” she says. “If you can chew it, it goes in the compost.” The program incorporates food donations and composting, as well as recycling “waste stations” and other conservation and sustainability practices. Tammy Thornton, a member of the Zero Waste Committee, who worked with Priest to get the initiative off the ground, says that the students’ experiences often makes parents think about what they do at home. “What needs to change is the mindset of how you shop. If you’re not meal planning or thinking about what food you already have, and then you don’t use it or it goes bad, people just throw it away.”

At Greens Farms Academy (GFA), Dr. Heather Heenehan tackles the school’s sustainability efforts. The school operates an organic teaching garden built using their own compost, with a rain garden to filter storm water runoff. They also donate excess food from on-campus events to Food Rescue US for distribution to those in need, and they work with TerraCycle for recycling their non-food waste. They use a large, industrial auger to process their compostable waste on-site, and they even have bees on campus as part of their curriculum. 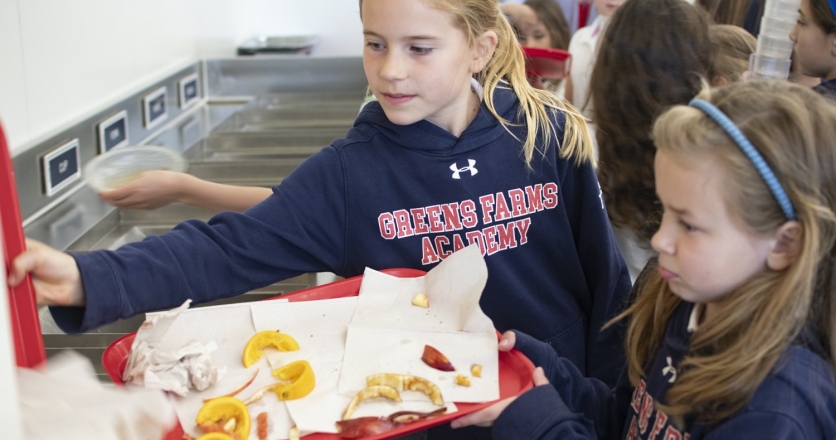 Heenehan, an Upper School science teacher and Sustainability Coordinator, says that their Eco Club recently assessed the removal of dining trays from the cafeteria. “We had a pilot experiment for going trayless in the cafeteria, [collecting] data with and without trays,” she says. “We had 20 pounds less food waste without trays. If you limit the amount you take – only taking what you can carry – there’s less waste.” Another saving grace of going trayless? Energy and water are saved, because there are no trays to wash. “We calculated about two gallons of water per tray is used to clean them,” said Tess McCormick, a student at GFA and a member of Heenehan’s Eco Club. “The next step is trying it with the Middle School, now that we’ve had success at the Upper School.”

In the face of dire reports about the scale of food waste in the U.S., along with the gravity of its consequences, Connecticut schools are enacting policies and initiatives that not only reduce waste, but that provide understanding of the issues surrounding it for our students to carry forward. These programs provide a range of solutions – from composting to food donation – but they share an educational component, providing students with knowledge of the issues and, perhaps most importantly, an awareness of the impact that individuals can have. Says GFA student, Camille Ewing, “even the little stuff we can do can go a long way.”

Local Food Stories and Recipes - in Your Inbox!

Local Food Stories and Recipes - in Your Inbox!

In Connecticut, a resurgence in composting is underway, and new commercial enterprises are working hard to create the necessary infrastructure to make composting as easy and accessible as recycling. R...

In a refurbished Meriden factory that has manufactured everything from woolen goods to meat choppers, one agricultural startup is hoping to influence the future of Connecticut agriculture by redefinin...

In Our Spring/Summer 2020 Issue

Since launching in 2006, edible Nutmeg has always been focused on matters of sustainability within Connecticut’s food systems. Yet, in a world awash with grim tidings about the state of the environmen...
Article from Edible Nutmeg at https://ediblenutmeg.ediblecommunities.com/food-thought/composting-new-curriculum

Get the best of Edible Nutmeg's seasonal stories and recipes, every week.